The ancient Babylonians have been one of the most influential cultures in history. They gave us the concept of 60 seconds in a minute, 60 minutes in an hour and 24 hours in a day, they developed the first mathematics and astronomy and are responsible for the fact that there are 360 degrees in a circle and 12 months in a year, as well as for most of the constellations that we still use.

Their legacy is still being felt today on every wristwatch, in every ticking mantelpiece clock, every wall calendar, every train timetable, every compass, and mathematics textbook, astrological map, horoscope and even every computer and smartphone.

However, the word “Babylon” has been reviled for centuries, sometimes by people who never even met a Babylonian. The Babylonians have been typecast as an arrogant people who wanted to built a tower to usurp God, as a great whore/harlot dressed in purple and scarlet and riding a seven headed wild beast, and even as the nefarious political systems of the world including the police. This highly exaggerated negative characterisation is mostly due to their contact with another highly influential ethno-cultural group: the Hebrews.

I would like you to sweep aside all those preconceptions of this people and look at them with fresh eyes. They were human beings like you and me, and they had a wonderful culture which a surprising amount of our 21st century culture is based on.

The Babylonians counted using a sexagesimal system, meaning that it used base-60. 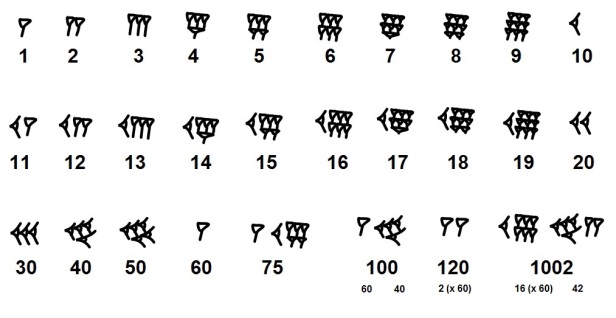 We use a base-10 counting system in modern times. You probably remember looking at a chart like this in primary/elementary school to break down the number 2,634:

However, even though this number represents 2018, the Babylonians wouldn’t have used that to describe this year because the CE/BCE system (more commonly known as the “AD/BC” or “Anno Domini” system) of numbering years didn’t come into existence until 525 CE when Dionysius Exiguus of Scythia Minor invented it, and it only came into common use in the 800s CE.

The Babylonians instead used the regnal year of the current king, similar to how the Japanese use the number of years that their emperor has reigned. In Japan, the year 2018 is Heisei 30 meaning the 30th year that Emperor Akihito has been reigning. If we used this dating principle for the UK, we would be in the 65th regnal year of Queen Elizabeth II. She became queen in 1952, but her first regnal year would have been 1953, when she was crowned.

“2018” in the Babylonian language of Akkadian would have been Year 65 of Elizabeth queen (of) Britain and may have been written something like this:

So, let’s look again at the first line of the tablet known as VAT 4956 to see in which year it was written:

I’m sure you now recognise the number “37”. This tablet was written in the 37th year of Nebuchadnezzar, king of Babylon. In a future post we will find out exactly what year that was.

The Babylonian day began at sunset, and the first lunar month of the year started when you could see the first sliver of the new moon after the vernal equinox, usually mid-to-late March.

There were 12 lunar months in the Babylonian calendar: 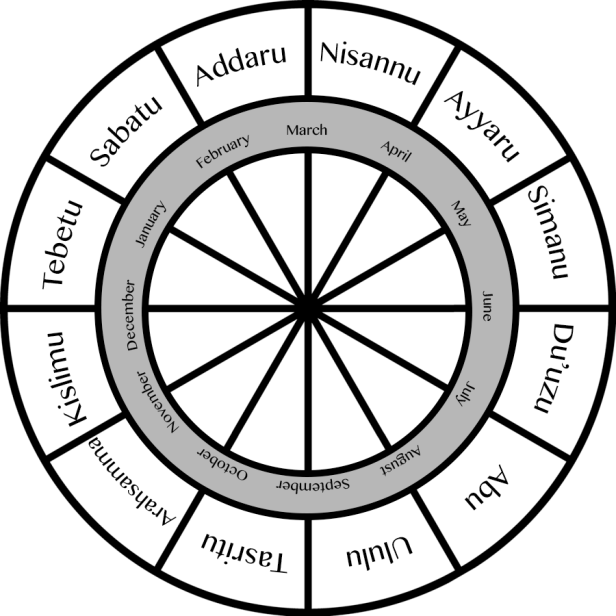 The time between new moons is only 29.5 days, so this gives us 354 days. In order to keep the year beginning just after the vernal equinox, a 13th leap month called “Addaru II” was often added. This is exactly how the Hebrew calendar worked too, and in fact, the Hebrews would have derived their calendar systems and even most month names from Mesopotamia: Nisan, Iyar, Sivan, Tammuz, Av, Elul, Tishrei, Marcheshvan (or Cheshvan), Kislev, Tevet, Shevat, Adar.

So we know that the tablet started to be written on the 1st day of Nisannu, which is mid-to-late March. The Babylonian astronomer/scribe began to write it just after sunset when he saw the first sliver of the moon which marked the beginning of the Babylonian New Year.

There were only 5 planets known to the Babylonians and they were also the names of gods:

(Earth wasn’t then considered a planet as the word “planet” means “wandering star”. The earth for them was the solid ground we walk upon; it was certainly no star and it clearly did not wander).

The modern Western constellations are originally based on the Babylonian constellations. Contact with Alexander the Great’s Macedonian Empire transferred some astronomical nomenclature from Babylon to Greece and hence to Europe:

However, some constellations were renamed, and others were rejected and replaced by new ones that the Babylonians didn’t have:

For example, these two pictures are the same portion of sky, but with the constellations arranged differently to represent the modern and ancient constellations.

When they looked up at the same portion of sky, the Greeks saw the winged-horse Pegasus of their mythology and a pair of Fish, but the Babylonians saw a pair of Fish in a slightly different part of the sky, as well as a Well-Bucket and a Swallow.

It’s very likely that the Greeks got the fish constellation from the Babylonians, but because they wanted to squeeze in their own Pegasus, they “moved” the fish to make way for it.

By the way, do remember the Swallow constellation, because it is going to come up again in a future article.

By the way, I’m writing this article in mid-February 2018, and the constellations of Pegasus and Pisces can be seen directly in the West, and you can just about observe the pentagon-shaped part of Pisces (or of the Swallow) directly in the west, just above the horizon. The rest of the Swallow (the head of Pegasus) is below the horizon, but you can see Pegasus’s body (the Well Bucket) as well as all four legs of Pegasus.

The stars and planets move across our skies with a regularity which is entirely predictable. Not only can we predict future eclipse and appearances of comets (see blog post on Halley’s Comet Observation Tablet), we can retrospectively look at ancient skies.

The 5 planets known by the ancient Babylonians repeat their approximate positions in the sky about once every 18,588 years, and that figure gets far bigger if we include eclipses, comets and constellations, so with just a few coinciding astronomical observations, we can accurately pinpoint the date that a tablet was written in.

When we look one final time at the VAT 4956 tablet, we notice that it says:

If we can identify what the “Bull of Heaven” is (and I’m sure you’ve already guessed) we can know exactly when the scribe pressed his stylus into a lump of damp clay.

In the next article, we’re going to look more deeply at that remarkable tablet, the VAT 4956, which can help us to definitively identify the 37th year of King Nebuchadnezzar. With that knowledge, we can then know what his 19th year was, and hence, when Jerusalem was really destroyed by the Babylonian army.

W. Muss-Arnolt (1892), The Names of the Assyro-Babylonian Months and Their Regents, Journal of Biblical Literature

Gomi, Tohru, “On the Position of the Month iti-ezem-dAmar-dSin in the Neo-Sumerian Umma Calendar”, Zeitschrift für Assyriologie und Vorderasiatische Archäologie, 75 (1985), 4–6.

One thought on “Babylonian Mathematics and Astronomy”